Is anyone else ready to escape the heat? Well, why not just escape?

That’s the challenge for three teams on the new TNT reality competition show, The Great Escape, which premieres this Sunday at 10/9c. The show drops three teams of two in a secret location. Then, they have to race their way out, facing challenges along the way. Oh, and the occasional guard, who will take you back to the start if they catch you. The winner gets the honor of having broken out of some of the world’s toughest places — and $100,000.

I had the pleasure of talking with the show’s host, Rich Eisen of NFL Network fame. He’s taking full advantage of the football break and taking us along for the contest of a lifetime that takes viewers and contestants alike through mysterious locals like Alcatraz, an insane asylum, and the USS Hornet.

Check out our chat below, and don’t forget to check out the show this Sunday! 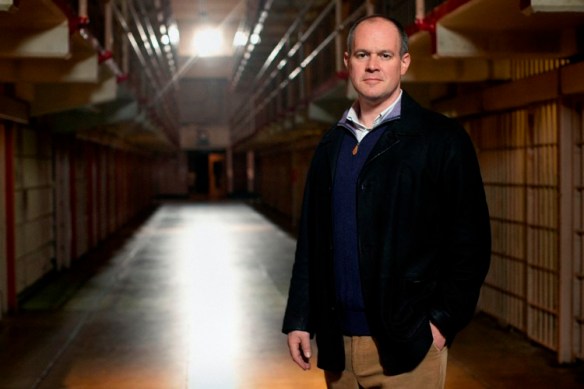 So I have to ask, how did you get involved with The Great Escape? It seems very — outside of what you’re really known for, especially with the NFL Network.

Well, one of the executive producers and co-creators of the show, Charlie Ebersol, I’ve known for a long time, and he came to me over a year ago saying, I want to show you something. Let’s meet. So we met, and he showed me on his iphone this incredible sizzle reel for The Great Escape that was fronted by Ron Howard. And he told me who was involved — Ron Howard and Brian Grazer’s Imagine Entertainment, Bertram van Munster, and Elise Doganieri, the creators and producers and showrunners of The Amazing Race. And they had never done a second reality show before, so this was their first bite into doing it a second time. And TNT was the network that was interested in piloting this and putting it on television if it worked out. And I’ve known Michael Wright from TNT for several years. And I was blown away.

And the funny thing is, anybody who — I assume you’ve seen — have you seen an episode of this?

I have. I’ve seen the first episode.

Yeah, I mean anybody who’s seen it is sort-of blown away by it. And even just the three-minute reel of me seeing what they had in mind, blew me away. And so I was interested from Jump Street. It all came together. And part of it, too, was, you know, they’re shooting in what we call the non-playing season of the NFL, and it’s airing mostly outside of the NFL season on Sundays, which I’m used to be on television, I guess, so it sort-of all worked perfect.

Great. And I’m kind-of curious, as far as — you talked about the sizzle reel. What particularly stood out to you that makes it unique. I mean, I’ve seen the first episode. I was completely enthralled the entire time. I’m curious what grabbed you.

Well, what grabbed me was just the sheer — the hugeness of the production. It’s grandiose. And the way it was pitched to me and the way it has been produced and the way it will be broadcast — it is huge. It’s like a summer blockbuster, popcorn-type event!

The thing that I really like about it, too, is it stars real people. These are real folks, you know, mother/daughter teams, father/daughter teams, brother/sister teams, best friend teams, the “platonic” friend teams. I mean, these are real folks, and when they win the money in the end, have real life issues that are aided in winning this money. And it’s all being run in a real location. And that’s the thing that I loved about it. They’re like, we’re going to go to some really crazy places that exist and turn it into our movie set starring real people. And I’m like, ok! That sounds great! And I’ve watched it now executed eight times; we’ve got two more of the ten episodes to be shot, and I can’t wait to do them.

You mentioned the contestants, and I just have to ask: When you meet them for the first time, do you have any hunch or any idea of who might win?

[Laughs.] You know, we all sit back there as we watch the game, and we’re like, “I think this team’s got it. I think that team’s got it.” We have no idea to be honest with you. You know, you can sense that — it’s physical and it’s mental challenges. And the mental challenges frequently involve breaking a code or solving a puzzle, and you can have the most physically-ripped team bust down walls or scale or propel a building or do all that stuff, and then they get to the mental stuff, and you’re like — there’s a team in a future episode, these two New Englanders, who have accents straight out of Good Will Hunting, who had issues with a mental challenge, that I just said to my group as we’re watching in real time, I’m like, “This is like watching Larry Bird take the SAT. This is painful.” And, you know — so you can’t — you can sort-of guess but you never know. Because a lot of these teams get put under a microscope and it’s pressure-packed situations, so you never know how people are going to handle one another when they’re in those crucial situations.

And the element with the guards certainly slows some people down.

Yeah, the guards. Because when people are captured, they’re brought back to square one. So they could be on the verge of darn near winning the thing, and if they’re captured, they have to go back to square one, but they don’t go from point A, which is square one, back to point B, where they were captured in a straight line. They have to go through a couple of stages sometimes before — or transitions between one stage and another — they’ve got to go through it again. And sometimes they’ve used every fiber of their being to overcome a fear to even get through a challenge that involves maybe some heights or involves water or, you know, mud, dirt, smells, and they don’t want to do that again. So they don’t want to get captured again and it sometimes paralyzes a team. And sometimes causes them to argue with one another, and that’s part of the challenge of winning The Great Escape.

So do you have a favorite location or episode so far?

Well, the three that I can tell you about right now, I mean, Alcatraz is obviously iconic. That was incredible, being able to just walk through that building, and, you know, I’m going to be tweeting on my handle, @richeisen, some photos after the airing of each show that I’ve taken from my handheld, from my position throughout the game as it’s being prepared, you know, give you some behind-the-scenes looks of the show. And, “Here I am. It’s 2:00 in the morning. We’re getting ready to run the game, and I just strolled right up to Al Capone’s cell, and fired off a picture, and this is pretty cool.”

But, you know, the aircraft carrier that we’re on, the USS Hornet, was built by women in the — in World War II, the Rosie Riveters, and the main job at peacetime for this awesome vessel was to pluck the capsules out of the water when the astronauts came back in from the atmosphere. So Neil Armstrong’s first steps back on planet Earth are painted white on the deck of the USS Hornet. And a stage was run right through there for The Great Escape.

And then there’s an insane asylum where we shot, and it’s the only time in my career where, as I’m shooting and on camera…a white owl is screeching overhead. It was incredible. These places are creepy, they’re unique, they’re mysterious, and there are some that are coming up that I never even knew existed on the planet.

Sounds awesome! So this is more of a fun question, but if you were on the show, who would your partner be?

That’s easy! I would choose Warren Sapp because he’s got it all. He’s got the brawn, so if we need to bash through a wall, you know, I mean, I could take my cracks at it, but Warren would probably need fewer cracks at it. And he’s also, you know — he’s got the smarts. He could solve these puzzles. And he also understands that you have to be a teammate. So he — and plus, you know, I mean, he’s the people’s champ, he showed Dancing with the Stars. So, he’s won a Super Bowl, darn near won the dancing competition, so he’s nimble, he’s a champion. I’d take him.

I was wondering if you have a favorite reality series, now that you’re in this genre.

You know — I know it sounds like a cop out — I’d have to choose The Great Escape. I really would because the only thing that’s like it, obviously, is its parents, in terms of The Amazing Race, but in terms of just a one-hour show, where it’s real people going to real locations in a popcorn-type, blockbuster atmosphere, I’ve never seen anything like this. I really have not. And there’s an intelligence factor that’s required in this, too, so it’s not complete bubblegum.

And it’s stuff that I think people will be talking about. I mean, we’re watching it as it happens and screaming at the television screens. There’s no question people will do that when their watching it at home.

Yeah, I mean, because people are screaming, “Well, how could you think that? Well, what you need is staring right in front of you.” We just shot one episode where it was incredible how they were staring directly at the tool that they needed, directly at the item that they needed, for 40 minutes before they realized what it was. We were screaming at them the whole time. So I can’t wait to watch that on TV.

Well, great, thanks so much!

Don’t forget to catch Rich Eisen on The Great Escape this Sunday on TNT! Need more now? Check out the promo below!